Morocco’s arty future:  Forget the rugs and the pointy leather shoes, Marrakech is turning into a city for seeing – and buying - art Marrakech isn’t quite the centre of the contemporary art world – but it was for a moment this weekend. The tireless Princess Alia Al-Senussi, who sits on boards from the Tate to the Guggenheim, had arranged a series of sparkling parties around town. Glen Lowry, the director of New York’s MOMA, left an exclamatory “Bravo!” in the visitors’ book of the recently opened Museum of Contemporary African Art (MACAAL).

Eugenio Sandretto Re Rebaudengo, whose family owns one of the finest private collections in Italy, and Valerie Blair, the influential director of Marian Goodman’s London gallery, were among those seen wafting through the fragrant foyer of La Mamounia, the city’s finest hotel. 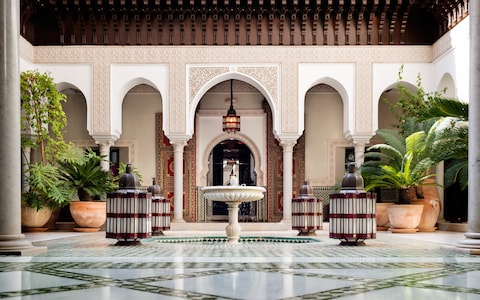 The event that had brought them to town? The first edition of the 1:54 Contemporary African Art Fair to take place in Africa itself (and rather conveniently, at La Mamounia too).

1:54 originally launched in London back in October 2013, with a remit to show African artists work, and proved a quick hit with visitors already in town for Frieze. Since 2015, its become an annual event in New York too, to coincide with the US edition of Frieze in May.

But for its founder and director Touria El Glaoui – a Marrakech native – being on African soil has constituted a whole new beginning. “It’s not only that we want to grow African collectors and a local market, but the artists themselves really wanted to show on their own continent,” she said. Meanwhile, the art world incomers discovered that Marrakech’s cultural scene, from private museums to new contemporary art galleries, is clearly on the rise. 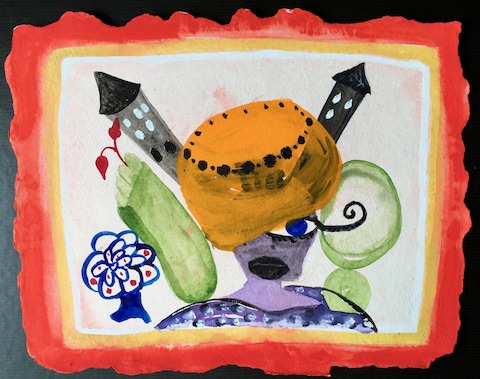 The fair itself was a tiny event – just 17 galleries from Africa and Europe testing these unknown waters – but size isn’t everything and it delivered nonetheless. Dazzling watercolours by Ouattara Watts commanded the booth at Sitor Senghor, a gallery from Senegal.

Watts, from Cote d’Ivoire, was close to Jean Michel Basquiat for the last eight months of his life – the pair met at a private viewing in Paris in January 1988. And while his work is unashamedly influenced by Basquiat, his own language of African masks, complex numerological sequences and the all-important foot – in his culture, the ultimate symbol of truth – is very much his own. The prices, from 3,500 to 15,000 euros, are also decidedly un-Basquiat. 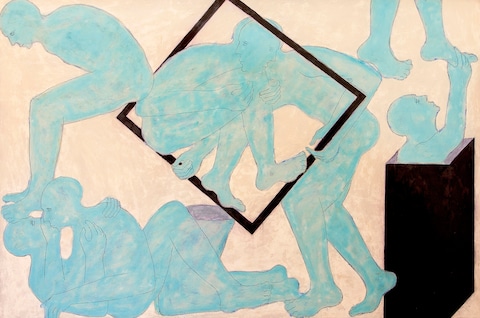 The photographs of Joana Choumali, another Ivorian, were shown at Loft Gallery from Casablanca – images of terrorism treated to a painfully neurotic overlaying of embroidery. The large-scale assembled textile works of Malian Abdoulaye Konaté were everywhere – he’s been looked at with fresh eyes (and added zeros) since his work appeared in this year’s Venice Biennale.

Copenhagen gallery Mikael Andersen dedicated its entire booth to the charged lines and dashes of Ernest Mancoba – a late South African artist whose desirability has been much enhanced since Tate Modern acquired some of his work. 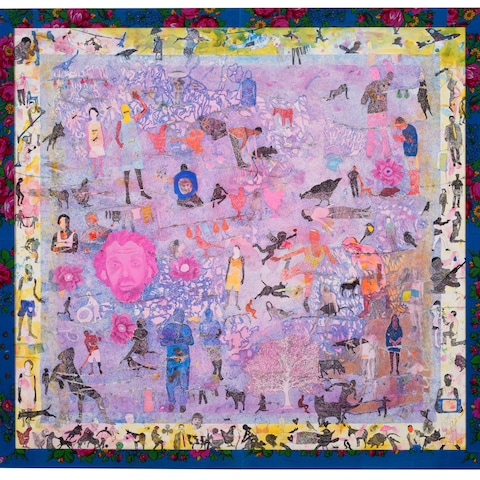 With the fair properly foraged, visitors set off for the Yves Saint Laurent Museum, which opened in Marrakech late last year, in a chicly designed pink stone and terracotta building by Parisian architects KO. (They also designed the Grand Café de la Poste here, a sort of Marrakech Wolseley.)

With its curving entrance, skinny windows of jewel-coloured glass, and interior walls lined in black mirror, the museum, funded by Saint Laurent and partner Pierre Bergé’s own foundation,  feels half mausoleum-half luxury store. It’s currently hosting a stunning temporary exhibition of work by Nourredine Amir – sculptural dresses heaving with narratives. But just a glimpse of a 1967 women’s culotte suit – Saint Laurent at his ground-breaking best – and an exquisitely presented Mondrian dress from 1965, make this worth a visit. 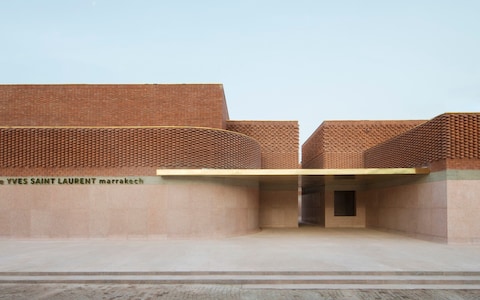 The MACAAL, a little further out of town, is also a private museum, funded by the property developer Alami Lazraq, and showing work from the collection of his Alliances Foundation on its top floor. Since Morocco banned both production and use of plastic bags in 2016, the country’s young artists – taking the environmental message to heart –seem hellbent on finding a million things to do with plastic petrol cans, water bottles and bubble wrap.

The ground floor has been intricately reconfigured with arched passageways and small room in order to show the temporary exhibition – Africa is No island – bringing together 40 young photographers whose work conveys aspects of contemporary African lives and more than challenge the dark continent stereotypes. Meanwhile, in the Gueliz district, private contemporary galleries are popping up in the handsome early twentieth-century buildings, where bars and cake shops occupy the ground floors. Nathalie Locatelli specialises in North African photography from the loft-like Galerie 127. And the Comptoir des Mines – once a mining company headquarters that hasn’t entirely lost its lovely municipal air – is now room upon room of video, sculpture, painting and textile works.

Time was, you’d come back from Marrakech with a rolled-up carpet, a pair of pointy leather slippers and a box of dates. Nowadays, it could just as well be a piece of art. Marrakech is moving on.