'Golden sounds of ancient rocks in the Karoo' by Lucinda Jolly

Songsmith Series: Golden sounds of ancient rocks in the Karoo

The N1 highway running through the Karoo towns of Matjiesfontein and Laingsburg defers to the laws of physics — its parallel lines never meet. It cuts through a flat, scrubby landscape seemingly mean with visual variety, distant mountains and koppies under big skies.

On a family trip to the Cape, artist Jenna Burchell discovered that anomalies are more easily perceived against a uniform background. She spotted a "distinctive white line" about 1m wide running parallel to the road, a feature at odds with the landscape’s homogeny. She discovered it was the boundary between two geological times — an "extinction horizon".

It is the marker of a devastating geographical event, a flood that happened 260-million years ago. The white line running from the great Karoo to South America was once covered by kilometres of Karoo sediment and lava. What remains after 150-million years of erosion is a band of ancient rock, known as the Matjiesfontein Chert Bed or the Matjiesfontein White Band Marker. The San used the chert stone for arrow heads and tools.

Burchell’s metaphorical extinction horizon demarcates the before and after of loss and upheaval. She says that her "work on Songsmith came to be a form of self-repair". 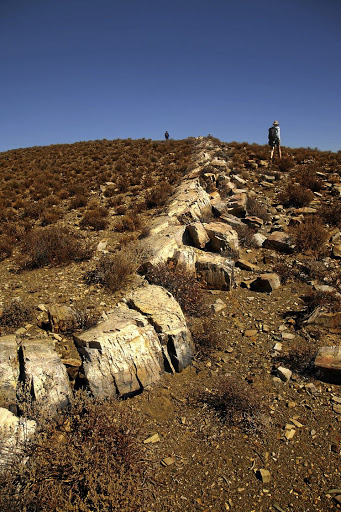 Thin white line: A close-up of the extinction horizon between the Karoo towns of Matjiesfontein and Laingsburg, with Burchell walking in the distance. Picture: JENNA BURCHELL

She had already produced a series of singing rocks in the Cradle of Humankind titled Songsmith, when she was approached by Spier, which was interested in buying an entire collection. Burchell’s intrigue with the Matjiesfontein White Band Marker evolved into Songsmith (The Great Karoo) made up of 12 interactive rock sculptures taken from the area and displayed at the Spier wine farm in Stellenbosch. It is the second body of work in the three-part Songsmith series which started with Songsmith (Cradle of Mankind) fashioned from rocks collected from the Khatlhampi Private Reserve.

Burchell tells of a highly indignant visitor who rubbished her rock fragment installation at the Nirox Sculpture Park until he passed his hands over the perimeter of the stones and elicited sounds from deep within the rock. At Spier there is also puzzlement or scepticism, followed by gratified smiles.

For Songsmith (The Great Karoo) Burchell walked, like a latter-day pilgrim, "this geology line between Matjiesfontein and Laingsburg" gathering rocks of volcanic ash and lava, and stories from farmers and farm labourers. "I wanted to collect rocks from the band rock that were naturally fractured from the band," she says. "When I repaired them, they needed to look beautiful, like creating a memorial of each piece of land."

Engraved on each of the plinths holding the stones are the GPS co-ordinates indicating exactly where each rock was found. They have been installed positionally according to where Burchill found them, on a 1:0.011 scale. "I would like to imagine these pieces in a future time as a piece of time" she says. The precise location of each rock was necessary so that Burchell could return with a geophysicist to record Earth’s geomagnetism at the site for the "song". The technology involved in sharing the song is a trade secret.

The process of harvesting it was discovered through a mistake made in a public art commission in Wales. A ground-penetrating radar sent high frequencies 6m down into the earth, representing eons of time. A recording was taken of the frequencies as they bounced back up towards the surface. Burchell took the recordings from each of her rocks and "pitch shifted" the sound so it can be heard by human ears. The "songs" match the weight of each rock.

The name Songsmith refers to the "golden sound instrument" — or gold coloured metal seam — which Burchell embeds into the cracks, gaps and fractures of the rock. It references the Japanese tradition of Kintsukuroi where damaged ceramic vessels are given added value and beauty when repaired with precious metal. Her gold seam creates a sensor for human proximity that triggers the song.

Burchell likes to call her art works "living sculptures" as they are affected by the environment and people. In the beginning she could not get the rocks to respond to children, but has solved that problem. Sometimes when it rains, the rocks will sing untriggered by human proximity for two to three minutes. Some people can trigger the singing without engaging with the sensor.

Burchell has had mystified owners phone her, at the same time from different SA cities, to report that their rocks would not stop singing. She discovered that solar flares were responsible.

Burchell is working on the third part of the Songsmith series titled Songsmith (Vredefort Dome). It involves one of largest known meteor craters. The dome is 190km wide and part of a 300km-wide crater whose impact ripples can be seen from space.

The 2,023-million year old cataclysmic event was considered more devastating than the event that caused the destruction of the dinosaurs 65-million years ago.

Burchell will be working with 15 rock fragments gathered from the dome, representing each minute of the event.

"Landscapes are culture before they are nature; constructs of the imagination projected onto wood and water and rock" - Simon Schama

"Replay the Earth’s song in your head and know that beneath you something genuinely incredible is happening." - Isabel Gilchrist

A Place in Time

Jenna Burchell is given the 'keys to the city' for Songsmith, Bangor

Be Art Magazine on HOMING at Art15 London

Another interactive, and quite interesting, piece was Homing by Jenna Burchell. Presented by the Sulger-Buel-Lovell from Cape Town, this evolutive “memory harp” plays sounds taken from our everyday environments, allowing the visitors to create their own tune. And, as the artist regularly adds new strings and sounds from the cities where the piece is shown, Homing also appears as a living organism, a universal creature, building delicates links between people and cultures from various countries.

Jenna Burchell has been awarded the Soundlands Art Commission. She is currently living ad working in Bangor Wales to complete her public sound artwork entitled Songsmith.

Two-Vivid Productions sat down with Jenna Burchell at Sulger-Buel Lovell Gallery in London after Art15.

Sulger-Buel Lovell congratulates Jenna Burchell for her success at Art15 London. Homing, her interactive sound installation has been highlighted by Artnet as top ...

Selected as one of 9 finalists from over 3000 contemporary art entries worldwide, Jenna Burchell will present her interactive sound installation Homing in the Aesthetica Group finalists exhibition in York, UK, hosted by Aesthetica Magazine and York Museum Trust.